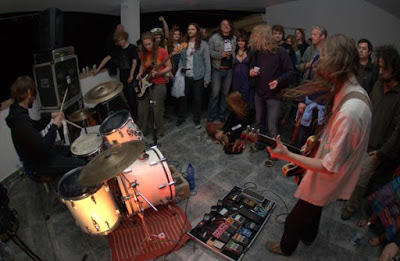 “Hills formed as a 3-piece aiming to make music that focuses on the groove/sounds and rhythm instead of the lyrics/message and classical songwriting structures. To create a meditative space heavily dependent on improvisation. To create a feeling but not necessarily to explain it through words. Influenced by everything from the early experimentation of John Coltrane via the repetitiveness of Velvet Underground, Krautrock / Psych in general and the grimness of early black/ death metal bands such as Hellhammer and punk. Hills try to keep it honest, analog and raw in the very best way they can.”